The world is on edge as many European countries have already identified people infected with the Omicron strain. Many countries in Europe and the United States quickly cut off air links with eight African countries, including South Africa, and Israel reacted particularly thoroughly, announcing a 14-day closure of its borders to all foreigners.

On November 27, the world's first image of a new mutant strain of Neocoronavirus, Omicron, was released by the research team at the Children's Hospital in Rome, Italy. 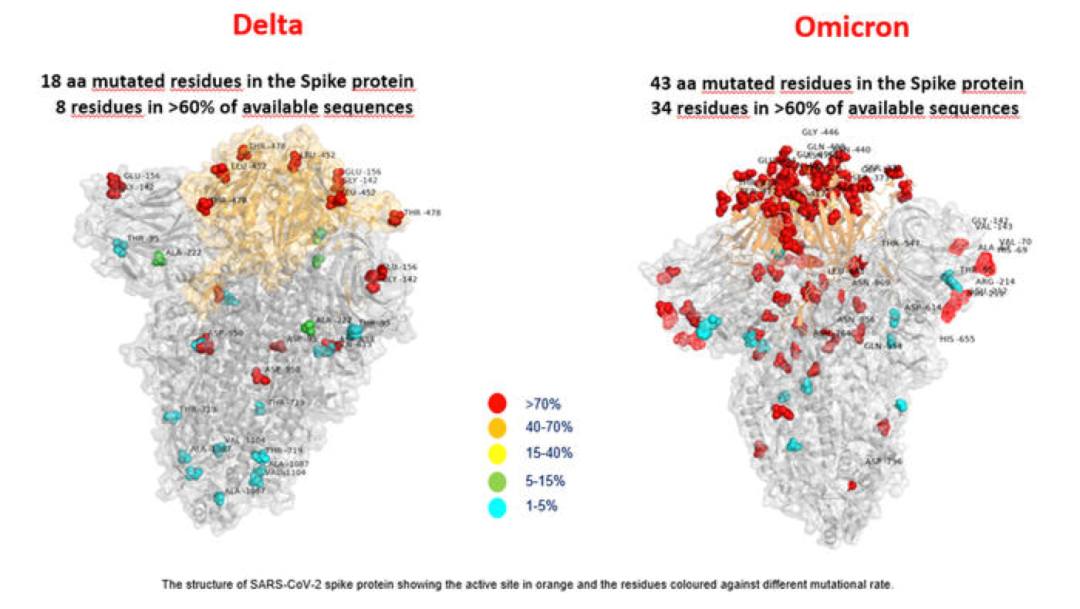 The images show that the Omicron strain possesses more stinging protein mutations than the new crown mutant virus Delta strain. These mutations are diverse and mostly located in regions that interact with human cells.

02 61 people on two flights from South Africa to the Netherlands tested positive! 13 of them were infected with Omicron mutant strain


The National Institute for Public Health and the Environment (RIVM) in the Netherlands has confirmed 13 cases of the variant of Omicron among travelers from South Africa, the BBC said on Nov. 28. The Dutch health minister warned that more cases of "Omicron" infection may appear in the country.

Earlier, CCTV news comprehensive "Washington Post", AFP news, local time 27, the Netherlands Ministry of Health issued a statement that the 26th from South Africa to the Netherlands two flights of 600 passengers, there are 61 cases of positive detection of the new coronavirus.

The Dutch government is contacting about 5,000 people in the country who have a history of travel to the southern African country since Nov. 22 to the present and is asking these people to go to a medical facility to be tested for the virus as soon as possible.

KLM Royal Dutch Airlines previously responded that 624 passengers on two flights from South Africa on the 26th had been checked for proof of vaccination or negative nucleic acid tests before boarding, but the airline was surprised that 61 of these passengers tested positive for the new crown virus upon arrival in Amsterdam, but was unable to provide an explanation at this time.

The Dutch Health Institute announced on November 28 local time that 13 of the 61 passengers from South Africa who were previously diagnosed with New Coronavirus were confirmed to have been infected with the Omicron strain of the New Coronavirus variant. The Netherlands has thus become the European country with the highest number of cases of infection with the Omicron variant strain found so far.

Researchers are continuing to sequence the virus in the remaining positive cases and do not rule out that more cases infected with the Omicron variant will be found.


Since South Africa reported the discovery of the novel new coronavirus variant B.1.1.529-Omicron to the World Health Organization on November 24, at least 9 countries and regions including Botswana, Belgium, Israel, UK, Germany, Italy, Hong Kong, China and Australia have reported the discovery of the novel variant within 5 days so far. In addition, the Netherlands and the Czech Republic are also suspected to have traces of this mutant strain, and further sequencing of the virus' genes is being done.

The Centre for Health Protection of the Hong Kong Department of Health also announced that as of 0000 hours on November 28, three new confirmed cases of Newcastle pneumonia have been diagnosed in Hong Kong, making a total of 12,428 cases in Hong Kong so far (including 12,427 confirmed cases and one suspected case). The new cases are all imported cases, two cases involve infection with a mutated strain of virus, and the test result of another mutated strain of virus is pending. The cases involved three men aged between 37 and 80 years old, all of whom arrived in Hong Kong from the specified areas in Group B (medium risk). One man tested positive while waiting for a connecting flight in the restricted area of Hong Kong International Airport, and the other two were confirmed during quarantine.

At present, no cases of Omicron infection have been reported in mainland China. The reporter checked the official website of the Civil Aviation Administration and found that in recent weeks there have been only fusion notices related to flights to South Africa.

Below we have a list of countries that have discovered cases of the omicron variant of covid-19 either within the community or in a plane upon landing at its destination:


The discovery of the Omicron strain in South Africa and other countries has caused a high level of global alarm. So far, about 20 countries and regional governments have issued or are preparing to issue entry restrictions on flights and passengers from southern African countries.

Among them, the British government said on the 26th, from the same day, banned the entry of flights from South Africa and five neighboring countries, requiring people with relevant travel history to undergo nucleic acid testing and isolation.

Switzerland announced on the same day, an indefinite ban on all direct flights from Botswana, South Africa and other countries to enter the country.

On November 26, the Italian Ministry of Health has decided to ban the entry of people who have spent the last 14 days in eight African countries, including South Africa and Zimbabwe.

Germany's disease control agency has classified South Africa as a "virus mutation area", and all people entering Germany from South Africa must undergo a 14-day mandatory quarantine, regardless of whether they have been vaccinated.

Pakistan has issued a travel ban on travelers from South Africa, Lesotho, Swaziland, Mozambique, Botswana, and Namibia, according to a Nov. 27 notice from Pakistan's National Command and Operations Center.

In addition, Russia also announced that it will ban foreign nationals from some countries and regions, including South Africa, from the 28th of this month.

According to U.S. media reports, the U.S. government will start imposing travel restrictions on citizens from seven countries, including South Africa, from the 29th of this month.

Health Canada also announced on the 26th that it will ban foreign citizens who have traveled to southern African countries in the past 14 days.

Israel has banned its citizens from traveling to southern Africa after new mutant strains of infection were found in its territory. Local time on the 28th, Israel decided to ban the entry of all foreigners, the ban will last for 14 days.

Singapore and Malaysia announced on the 26th, respectively, will prohibit the entry of travelers who have recently visited South Africa and other seven countries.

The Indian government has issued a reminder advising local authorities to implement New Coronavirus testing and health screening for international travelers from South Africa and other "risk zone" countries.

Japan has also implemented measures to suspend inbound flights and quarantine travelers from South Africa and other countries.

South Korea's epidemic prevention department announced that from 00:00 on the 28th, foreigners from eight countries, including South Africa, will be banned from entering the country to prevent the entry of the mutated strain of New Guinea virus "Omicron". No cases of Omicron infection have been found in Korea yet.

The South African government responded to the travel ban issued by many countries around the world on the 26th, saying that the travel restrictions imposed on travelers from South Africa are harsh and unscientific, and that this practice is also inconsistent with the WHO recommendations.


On the 26th local time, Ding Liang, a Chinese-born epidemiologist and senior researcher at the Federation of American Scientists, posted that the new variant has twice as many "bad sting mutations" as the Delta variant, and that "the B.1.1.529 variant may be 500% more potent than Delta. This is the most alarming statistic to date".

To prevent the spread of the new coronavirus variant B.1.1.529, the U.S. will impose travel restrictions on citizens from eight countries, including South Africa, Botswana, Zimbabwe, Namibia, and Mozambique, starting Nov. 29.


At present, several vaccine developers are studying the impact of Omicron on vaccines, and some of them have already started to deal with it.

According to the Global Times, on the 28th, we learned from Concierge Biologicals that Concierge Biologicals is highly concerned about the mutant strain of Omicron and is currently collecting and analyzing information about the mutant strain. It is understood that Conciano Biologics has already started vaccine development for the new mutant strain, and the person concerned said, "Given the advantages of Conciano Biologics' adenovirus vector technology platform and mRNA technology platform, Conciano is confident to come up with a new vaccine against the mutant strain in the shortest possible time once the protection of the existing vaccine is found to be reduced."

Paul Burton, chief medical officer at Modena, said he suspects that the new coronavirus mutant strain "Omicron" has the ability to escape the existing vaccine, and if so, a new coronavirus vaccine against the Omicron mutant strain could be available in early 2022. Modena previously discussed plans to address the Omicron variant, including a new vaccine candidate, mRNA-1273.529, against the variant. The company said it is testing three new crown vaccine candidates booster shots against this variant. Omicron has mutations that appear in the Delta variant that are believed to increase transmission, as well as mutations in the Beta and Delta variants that are believed to promote immune escape, Modena said. The combination of these mutations presents a significant potential risk for accelerated natural and vaccine-induced immune weakening, the company said.

According to Beijing Daily, Kexing is highly concerned about the information related to the Omicron variant of the new coronavirus, and has started to actively collect and obtain information and samples related to the new variant through its global partner network, and will conduct evaluation and research as soon as possible to understand the impact of the Omicron strain on the existing inactivated vaccine for the new coronavirus and the need to develop a vaccine for the variant. Kexing said that the company has mature vaccine production process and large-scale production capacity, and has already carried out the development of inactivated vaccine for Gamma and Delta strains of Neocrown. If necessary, the company can quickly advance the development and mass production of new vaccines and has the ability to protect the demand for vaccines.

AstraZeneca said it is conducting studies to collect data in two southern African countries, Botswana and Swatini, which will enable the company to collect real-world data on this mutated strain. AstraZeneca also said the company has developed a vaccine platform in collaboration with Oxford University, where the vaccine platform was created, to rapidly respond to the new variant. The company has previously said it is developing a variant vaccine to better target the Beta variant.

Pfizer and BioNTech previously said they are investigating Omicron (B.1.1.529), a new variant of the new coronavirus. The two companies expect to have more experimental data available within two weeks at the latest. The companies said, "These data will provide more information on B.1.1.529 and we may need to make adjustments to the vaccine if the variant spreads globally." Pfizer and BioNTech noted that they could adjust their mRNA vaccine within six weeks and begin shipping in batches within 100 days. Johnson & Johnson said they are already testing its vaccines for new variants. The company said, "We are closely monitoring emerging new coronavirus strains with SARS-CoV-2 stinger protein variants and are already testing the effectiveness of our vaccine against the new, rapidly spreading new coronavirus first identified in South Africa."
PREVIOUS：Turkish lira falls 15% in one day NEXT：The market is slightly up this week, near the